THE FOOD IS THE FRANCHISE®

At Carl´s Jr.®, the Food is the Franchise®. We are known for our best-in-class menu that consistently out-delivers the competition. Over the last 65+ years, Carl´s Jr.® has built a reputation as America´s premier burger chain, and is known as the place to go for big, juicy, delicious charbroiled burgers. Multi-unit franchise territories are available for highly-qualified, experienced candidates in the Western U.S. and international markets.

Carl´s Jr.® is a wholly-owned subsidiary of CKE Restaurants, Inc., a publicly traded company listed on the New York Stock Exchange (ticker symbol: CKR). The CKE system includes more than 3,115 restaurants in 42 states and in 17 countries, with more than 1,190 Carl´s Jr.® restaurants and 1,915 Hardee´s® restaurants.

INNOVATION IS THE DIFFERENCE

Carl´s Jr.® is focused on constant innovation and a desire to satisfy the tastes of young, hungry consumers through our premium menu and edgy, memorable advertising. We are known for introducing the 100% Black Angus beef Six Dollar Burger® line, the first sit down restaurant style burgers in the quick service industry. Available in a total of six craveable varieties, these gourmet burgers are complemented by our premium Hand-Scooped Ice Cream Shakes & Malts™.

THE NUMBERS TELL THE STORY

[The figures presented have been excerpted from the Financial Performance Representation in the 2008 Carl Karcher Enterprises, Inc. Franchise Disclosure Document. These figures represent averages across company-operated restaurants in the United States. Individual performance will vary.]

BE A PART OF THE GREATEST FRANCHISE STORY OF OUR TIME 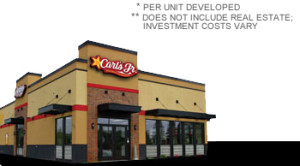