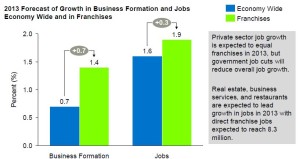 – While the franchise sector is outgrowing the broader economy and is expected to increase from the post-recession average in 2013, growth is still expected to remain below pre-recession levels. Job growth from 2001 to 2005 averaged 3.7 percent a year compared to the 1.9 percent forecast for 2013.

– The top policy concerns for franchisees are government regulation and healthcare costs. At the same time, more than 90 percent of franchisees want government to simplify the tax code with lower individual and corporate tax rates.

Overall, both analyses point to modest growth in the franchise sector for the remainder of the year and into 2014. However, according to franchisees and franchisors, government can take steps to improve the economic landscape through tax, healthcare, and immigration reform.