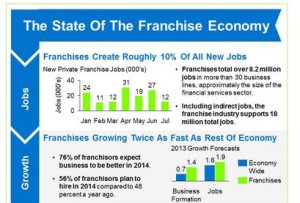 “The franchise sector continues to grow adding 184,000 jobs over the past 12 months and is expected to start twice the amount of new businesses than the economy as whole in 2013,” said IFA President & CEO Steve Caldeira.

Overall, both analyses point to modest growth in the franchise sector for the remainder of the year and into 2014.

The most important question is whether you will be part of that growth.